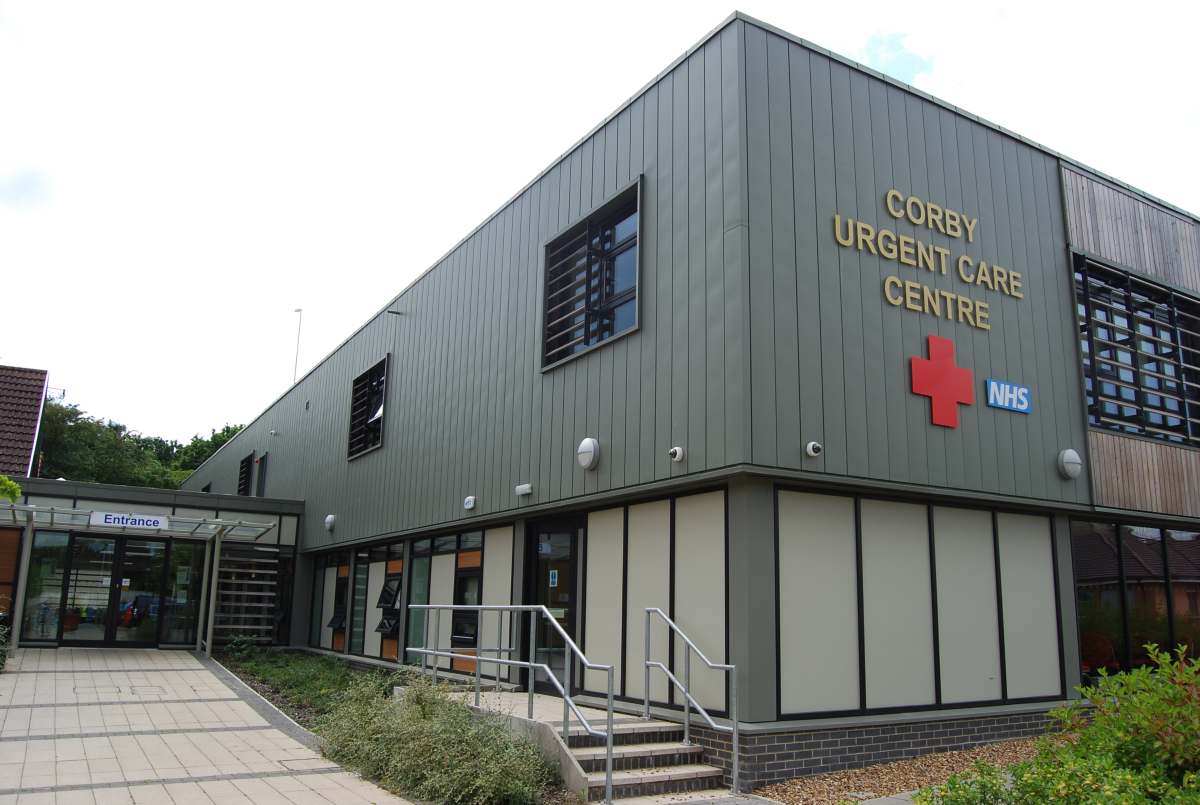 Back to the blog
Two amazing midwives and a nurse from Kettering General Hospital have received DAISY Awards* for the outstanding, compassionate, and sensitive care they have given to patients.
Last year KGH started to take part in the DAISY Award – an international recognition programme that honours and celebrates the exceptional care that many nurses and midwives provide every day.
As a result patients, family members and carers have nominated 183 staff members for the award after receiving great care. So far nine staff have received the award.
Staff who received the award are Midwife Tia Diver, from the Fetal Health Unit, Midwife Jodie Guyver, from the Delivery Suite, and Staff Nurse Donna Fahy, from Naseby B ward.
Midwife Tia Diver was nominated by Hayleigh, from Kettering, for the outstanding way she supported her two pregnancies – one of which involved a tragedy. In her nomination Hayleigh wrote:
I would like to thank Tia for when I was pregnant with my first daughter back in 2018. She was so caring, kind and just fantastic at her job that I built such a good relationship with her. I was scheduled for a c-section and Tia happened to be on annual leave the week I was having my baby. But when she saw my name on the list she cancelled her annual leave without me knowing. Then, waiting on the ward the morning of my c section, a face appeared round my curtain and said: ‘Shall we go and have a baby?’ It was Tia to my surprise! I burst into happy tears and couldn’t believe she was there. She walked me down to theatre and was there by my side the whole way through. I fell pregnant again in 2020. I gave birth to my second daughter at 22 weeks 2 days. Tia came down to the snowdrop room to see me after hearing my news. She shared her condolences and held my daughter. She made me cry again as I truly feel she is such a fantastic midwife. So the biggest heart felt thank you to Tia.
Midwife Jodie Guyver was nominated by Jade Mitchell from Corby for the support she provided during an emergency c-section delivery of her son. In her nomination Jade wrote: 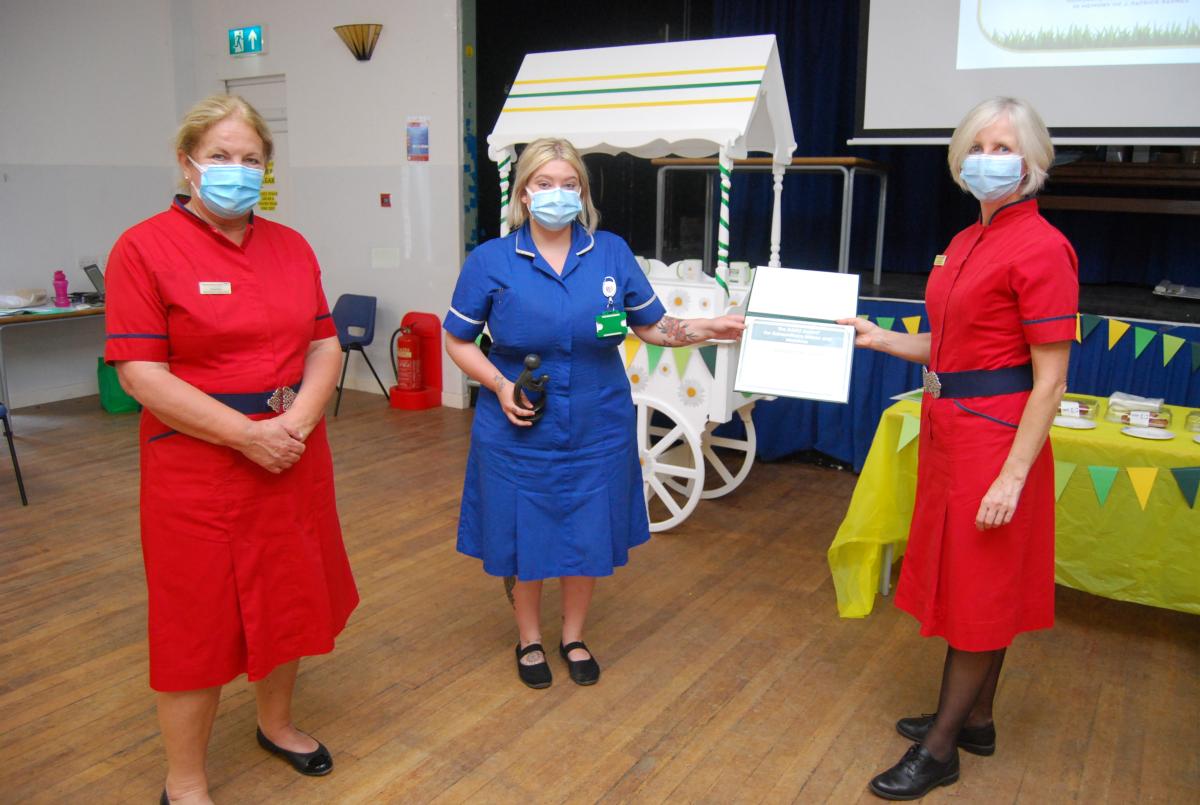 I was greeted by a lovely lady called Jodie and a student midwife and they made me feel more relaxed. Jodie noticed I was starting to lose a lot of blood with every contraction I was having so a team of consultants were there too. The team decided emergency C-section would now be my only option. Unfortunately my partner was unable to be there as he was looking after my first born and my labour partner was called into work that morning so I had no one to support me through it. Jodie and the team of consultants were absolutely amazing They supported me and sat with me through it all. I was in surgery for 4 hours after my boy arrived because I was still bleeding and ended up having an emergency blood transfusion. Although it was a horrible experience to go through, with no one I knew, I was made to feel relaxed. I will forever be grateful to her and the whole team who not only delivered my son but for potentially saving my life. Thank you all.
Staff Nurse Donna Fahy was nominated for the way she looked after a Corby man, Gareth, who was admitted to hospital as an emergency. In his nomination he said: 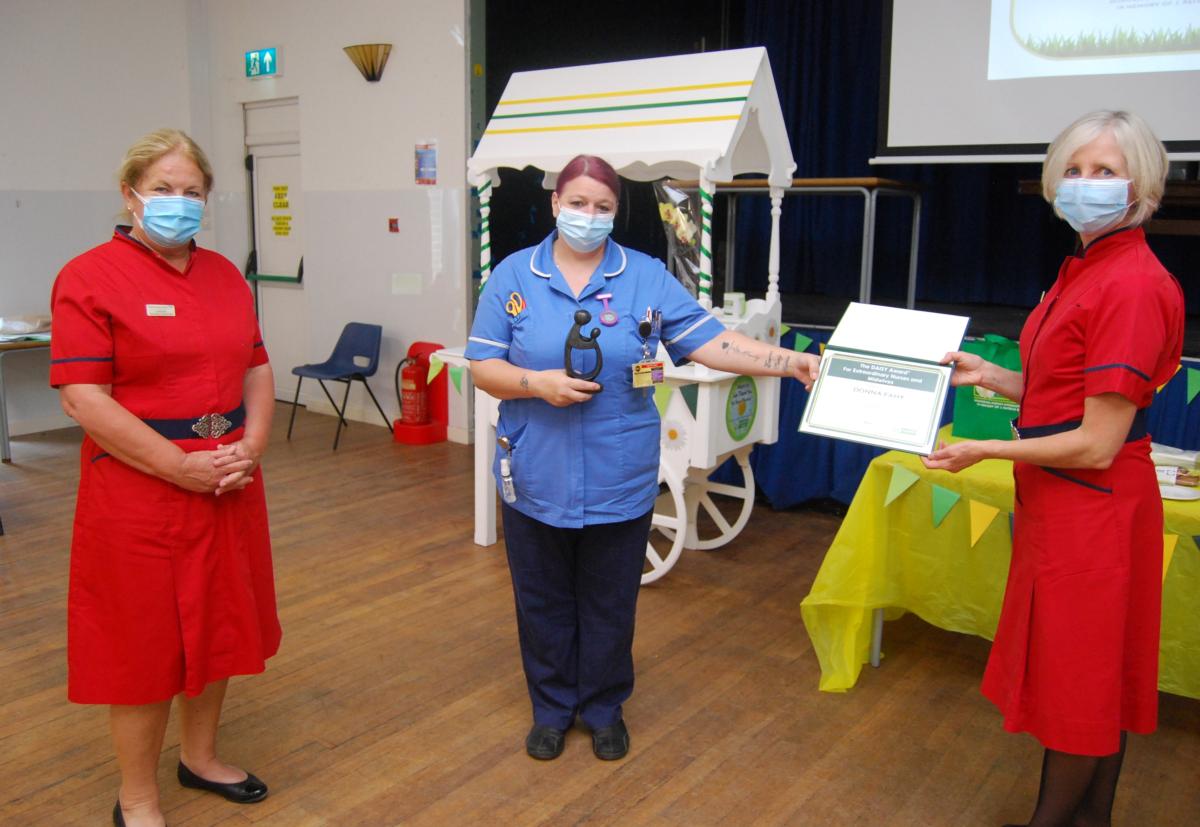 After I was admitted to hospital through A&E I was placed on the new Naseby annexe after spending some time in MAU, this is where I first met Donna, this lady is a genuine reincarnation of an angel! I was one of the first patients in the new Annex I arrived there at night and I was in a little bit of a bad way. The night staff were lovely and took good care of me. I’d been going through a really rough time mentally, physically and emotionally before I was hospitalised I was in a really fragile place. I was only in the care of Donna for two days when I was in hospital but she really helped me feel better not only physical but mentally. Nothing was too much trouble she was brilliant. I remember on the first day Donna was looking after me there was an elderly man next to me and I overheard he might have suspected dementia, his name was Anthony. Donna was doing observations and noticed Anthony had become very upset she stopped what she was doing and went over to him immediately and asked him what was wrong, he couldn’t really get across what was wrong and was confused. Donna knelt down to his level held his hand and rubbed his back and told him everything would be okay and he was not to get upset be she was there to look after him she stayed with him for a few minutes comforting him and reassured him everything would be okay, she got him a cup of tea and he calmed down and began to smile again. I saw all of this from my bed and I cannot described in words how much care and reassurance she gave to Anthony! It actually bought tears to my eyes, if it was my loved one I would want him to have the next level care Donna gave that day. I really can’t stress enough that what Donna and the Naseby annexe HCAs did will stay with me forever! Donna is an absolute credit to KGH and the NHS.
The winners were all presented with a DAISY award certificate, award pin badge and “Healer’s Touch” sculpture by Deputy Director of Nursing and Quality Di Postle, and Director of Nursing and Quality Leanne Hackshall on July 22.
Kettering General Hospital’s Deputy Director of Nursing and Quality, Diane Postle, who is overseeing the initiative, said: “I am delighted to be able to announce three more winners of the DAISY Award scheme at Kettering General Hospital.
“Well done to our midwives, Tia and Jodie, for the outstanding care they gave to two mums during some difficult times. They both went the extra mile to provide the sort of compassionate care we want our hospital to be known for and are worthy recipients of this award.
“And well done Donna for the incredible way she obviously does her job every day and her nomination really shows what a big difference those little bits of kind care and attention make to our patients.
“Once again I want to thank all of the patients and their families and carers who have taken the time and trouble to nominate our staff members for these new awards.
“They enable families to thank those individuals who have touched their lives, often at a time of great vulnerability. Please keep the nominations coming!”
Director of Nursing and Quality, Leanne Hackshall, said: “The experiences shared by those nominating our fabulous staff demonstrate how beautifully our staff meet all of the Trust’s core values of Compassion, Accountability, Respect, Integrity and Courage.”
To nominate a nurse or midwife go to the KGH website www.kgh.nhs.uk or follow the link https://www.kgh.nhs.uk/the-daisy-award or email your nomination to  kgh-tr.daisyaward@nhs.net