Back to the blog
Dr Ahmed Mukhtar, a respected consultant paediatrician and former medical director of Kettering General Hospital, died on 7th January 2021 after a short illness.
He joined the hospital in 1982 as a consultant and lead clinician for neonatal care, and served his local community for 23 years in that role
He was also the hospital’s Medical Director from 1998 until his retirement in 2004.
Ahmed, the son of the Chief of Police for the Kordofan region, was born and raised in the Sudan alongside his 11 siblings.
He studied medicine at the University of Khartoum, and moved to Britain in 1972 to conduct postgraduate research at Edinburgh University.
From there he went to Musgrave Park Hospital in Taunton where he met his wife, and fellow doctor, Deirdre.
Dr Mukhtar’s career took him to medical roles in London and Belfast before arriving at Kettering.
Fellow Consultant Paediatrician, Dr Patti Rao, who knew Ahmed for 25 years, said: “Dr Mukhtar was a very well-known and well-loved consultant paediatrician who supported literally hundreds of local families whose children needed hospital care.
“He was always friendly, kind, professional and respected by all who knew him – including his very many friends and colleagues at Kettering General Hospital.
“He made an immense contribution to paediatric care and also played an important role as Medical Director supporting the hospital’s medical teams.
“He was one of the most clinically sound and experienced consultant paediatricians of his time and one of the founding fathers of the neonatal service at Kettering.
“He was a great role model for everyone, but particularly for young doctors from ethnic minority backgrounds.
“He was a true professional, statesman-like, but always kind and approachable to patients, parents, and colleagues of all grades.”
Recently retired consultant Anaesthetist/Intensivist, Dr Linda Twohey, said: “My clinical work as an Intensive Care Consultant overlapped with Dr Mukhtar's when we were dealing with the sickest children.
“He was calm, wise, knowledgeable and skilled in the most challenging situations. I particularly remember the case of a child who nearly drowned, whose eventual complete recovery was undoubtedly due to his novel treatment approach.
“In his role as Medical Director, he gave sure and steady support to the consultant body and encouraged more junior colleagues to take on management roles to benefit patients and the wider hospital.”
Consultant Physician Andrew Steel, had known Ahmed since 1982 when they first worked together at the Trust. He said: “Ahmed was a respected man with a great sense of humour and who enjoyed his social life.
“When I first arrived in Kettering, he invited my wife and I round for supper, along with another new consultant and some of Ahmed’s non-medical friends. This simple act enabled me to meet a colleague whose path I may not have crossed professionally and also gave us some insight into the locality.
“When our baby son was acutely ill, he examined him and reassured us that he was okay and advised what action to take. He was both professional and compassionate but also gave us, as relatively new parents, the confidence to carry on.
“He also gave me professional advice. He suggested to me that I should apply for the vacant post of Post-graduate tutor. I was successful at interview and held the post for some years.”
Kettering General Hospital’s current Medical Director, Prof Andrew Chilton, said: “We all have fond memories of Ahmed. I will always remember his smile at the happy occasion at his installation as High Sheriff at Boughton House on that balmy summer’s evening where he individually greeted all his guests.
“His preferred method of addressing a crisis was calm with the offer of a Garibaldi biscuit. Many of you will share these memories. Our thoughts and sympathies are with his family at this difficult time.” 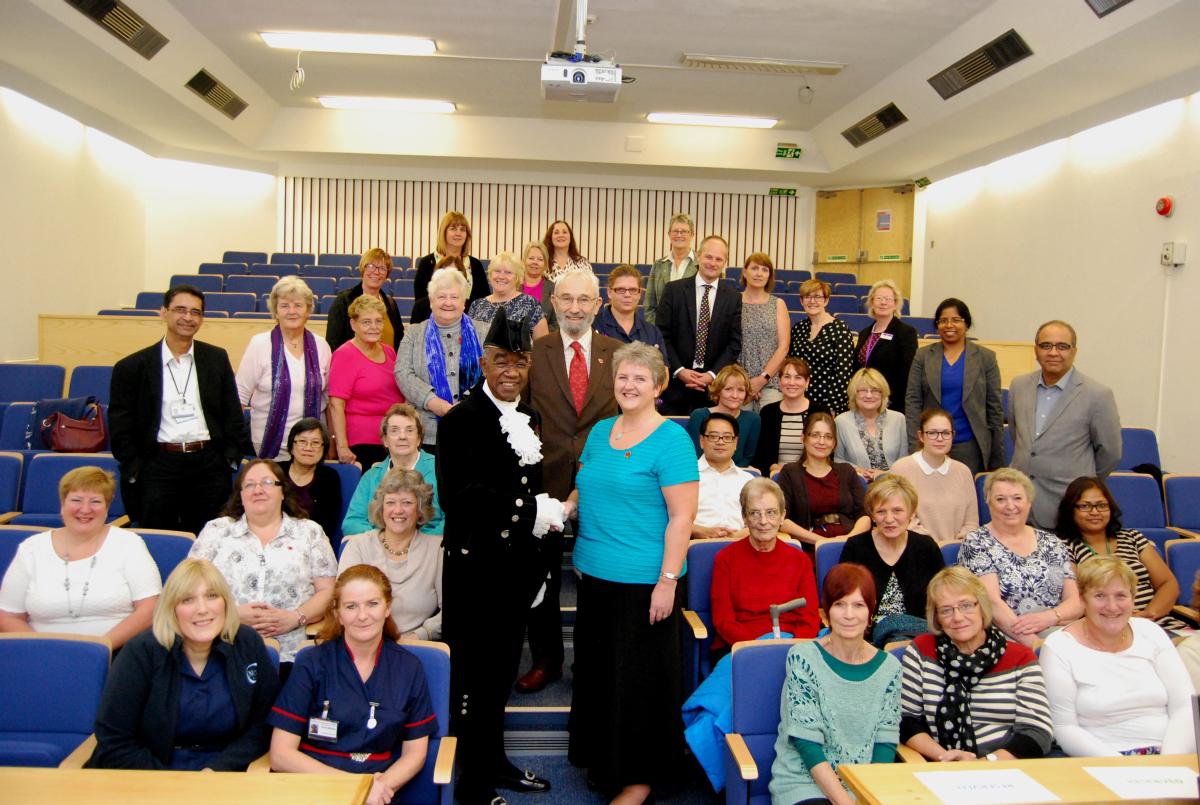 Dr Mukhtar was appointed a Deputy Lieutenant of Northamptonshire in 2008, and subsequently as the High Sheriff of Northamptonshire in 2015. The latter role is charged with supporting voluntary and statutory bodies engaged in all aspects of law and order and community welfare.
During his time as High Sheriff, Dr Mukhtar’s mission was to celebrate the efforts of organisations, groups and individuals who contribute to the wellbeing of children and young people.
Dr Mukhtar’s passion for Kettering General Hospital was evident when he helped KGH celebrate the hospitals 120th birthday in 2018. Delivering a presentation that tracked the hospital’s humble beginnings in the 1890s through to current day.
He was a driving force behind the establishment of the special care baby unit, and a lifelong supporter, running appeals which raised many thousands of pounds for new equipment.
Predeceased by a son, Moktar (Mark), he is survived by his wife Deirdre and their three sons Ebrahim, Bashir, and Sami