Back to the blog
A ground-breaking ceremony was held today, Thursday (November 17), to launch work on an amazing new £390,000 waiting area and adjoining landscaped garden for breast care patients at Kettering General Hospital.
The waiting area is being paid for by the Crazy Hats Appeal – a local charity which has raised almost £3.5m for breast care locally (and £1.4m for KGH) since its launch in 2001.
The charity closed in June last year and its final £390,000 donation was made last November to Kettering General Hospital to build the new waiting area and lounge and carry out landscaping to a small garden adjoining it.
Pictured with some of her fundraising team cutting the first turf is appeal founder, executive fundraiser, breast cancer survivor, and former Kettering head teacher, Glennis Hooper.
She said: “We are thrilled to update our many supporters on progress with the new waiting area project which will help to make the experience of attending hospital appointments, at what can be a worrying time, that bit easier. 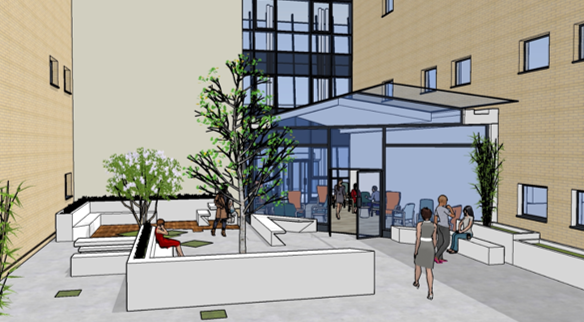 “For us it is the culmination of a long journey of support for breast care patients and of support for Kettering General Hospital.
“In 2007, when the hospital’s new Treatment Centre first opened, we donated £100,000 to help fund many items that were required for the new breast cancer services to function and to add many of the cosmetic and finishing touches to the area.
“Years later, in 2018, we noticed that the waiting area was beginning to look ‘tired’ and so started the idea of ‘Sprucing it Up’, a project that Crazy Hats would fund.

“As a result we will be giving a much-needed face lift to the hospital’s waiting area creating a calm, tranquil and peaceful area for both patients and staff. We are also landscaping an adjoining garden and modernising the reception area.”
Mr Salam Musa is a Consultant Onco-plastic Surgeon and one of the many KGH staff who has used the equipment supplied by Crazy Hats over the years.
He said: “The Crazy Hats Appeal has made an enormous contribution to breast care facilities at Kettering General Hospital by donating a wide variety of equipment and helping us to make our Treatment Centre more welcoming.
“This final donation will help us to further improve care for our breast cancer patients – and outside of those clinics for other patients as well - by providing the Treatment Centre with a much-improved waiting area, surrounded by a small-landscaped garden.”
Kettering General Hospital’s Chief Executive, Deborah Needham, said: “Glennis’s 20-year fundraising campaign has ended where it began, supporting her local hospital.
“We are proud and delighted to see work about to start on this significant improvement to the care environment for our patients.
“I want to thank every local individual, group, and business, that has supported Crazy Hats and hence supported our hospital.”
The new lounge and waiting area will be built by infilling a small outside quadrangle area in the centre of the Treatment Centre.
The Trust has now finalised architectural and design plans, and sought tenders from specialist firms, with work expected to be completed by May 2023.
Glennis said: “I would like to thank our ex-trustees, members, friends, supporters of Crazy Hats and the many, many, individuals and companies who have been so loyal and generous. Also Kettering General Hospital’s Chief Executive, Debbie Needham, and her team, for their time and commitment to this unique project.
“I would also like to reiterate my personal and heartfelt thanks to the remarkable Crazy Hats team who stood behind me to make everything happen. It certainly was an incredible 20 years!”
The charity is also thanking Bosworths Garden Centre for their commitment in helping with the garden area and to Stepnell of, Rugby, the company which will carry out all the renovations and the build itself.

Experiencing unprecedented demand for our services this weekend

Our hospital is experiencing unprecedented demand for our services this weekend, now more than ever we need your support to ensure our staff can care for those who need emergency care, such as choking, chest pain, loss of consciousness, serious blood loss, serious injury.

If you have a minor injury or illness or need urgent treatment Corby Urgent Care Centre is here for you.

If you have a medical concern that is not an emergency, please contact NHS 111 who can give you the right advice and direct you to the right service.

Thank you for your support ❤️