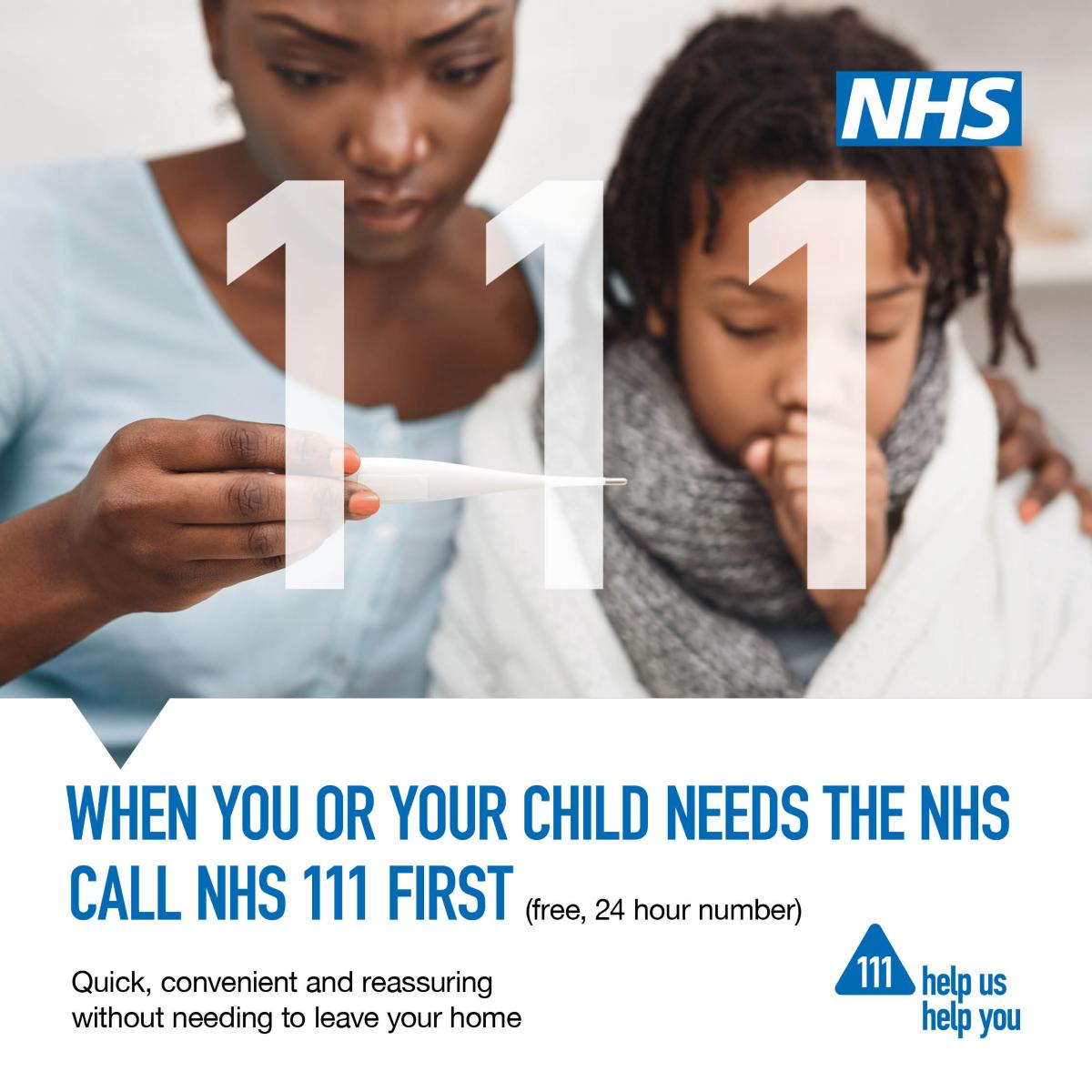 When you or your child needs the NHS call NHS 111 first (free 24 hour number), use the NHS 111 App or go to 111.NHS.uk.
Quick, convenient and reassuring without needing to leave your home.
Back to the blog

A dedicated local breast cancer charity is donating £390,000 to Kettering General Hospital as it winds down after 20 years of incredible work.

The Crazy Hats Appeal is paying for a brand new comfortable lounge and waiting area for breast care patients to be built inside the hospital’s Treatment Centre.

It is the latest in a series of enormous donations by the charity which has raised almost £3.5 million since its launch in 2001 by breast cancer survivor and former Kettering head teacher Glennis Hooper.

Glennis was diagnosed with breast cancer and had surgery at KGH in the summer of 2001 with follow-up treatment at Northampton General Hospital and Leicester Royal Infirmary.

She said: “It started as a fundraising event at my school – which raised more than £20,000 - and has just snowballed on from there.”

“Our final donation will be £350,000 to build the new waiting area and £40,000 for landscaping and to develop the garden area adjoining the waiting area.

“We felt that this was an improvement that would be much appreciated by breast care patients and other patients receiving care in the Treatment Centre. “

Over the years the charity’s fundraising has included 17 sponsored walks at Wicksteed Park and hundreds of other smaller events and kind donations by supportive local groups, businesses, and individuals.

The charity’s contribution to Kettering General Hospital’s breast service – which has received £1.4 million over 20 years - has been immense.

Crazy Hats has made huge contribution to KGH

Mr Salam Musa is Kettering General Hospital’s Clinical Lead for the Breast Service, and a Consultant Onco-plastic Surgeon who uses the equipment supplied by Crazy Hats.

He said: “The Crazy Hats Appeal has made an enormous contribution to patient care at Kettering General Hospital.

“The charity has helped us to constantly improve and update our equipment to enable us to meeting growing demand for breast cancer care – something needed by about 600 new patients in Northamptonshire each year.

“Their support has also been a tremendous morale boost for our staff and we really can’t thank them enough for their incredible efforts over such a long time period.

“This final donation will help us to further improve care for our breast cancer patients – and outside of those clinics for other patients as well - by providing the Treatment Centre with a much-improved waiting area, surrounded by a small landscaped garden.”

The new lounge and waiting area will be built by infilling a small outside quadrangle area in the centre of the Treatment Centre – which is currently little used.

Over the next few months the Trust will finalise architectural and design plans, seek tenders from specialist firms, with work expected to start next year.

“I want to thank every local individual, group and business that has supported Crazy Hats and hence supported our local hospitals.”

Following today’s donation, Glennis and the Trustees from the charity will continue to work closely with local architects, GSSArchitecture, on the design and completion of this important new waiting area.

The donation itself will be administrated by Kettering General Hospital and the Northamptonshire Health Charity – a body which oversees donations to hospitals and health organisations in Northamptonshire - as a protected donation, just for spending on the project.

The Crazy Hats Appeal’s story started in a very small way – and went on to become perhaps the most impressive single fundraising campaign ever seen in Northamptonshire.

Former Kettering Primary School head Glennis Hooper, 67, from Wellingborough, still remembers how it all began back in 2001 after she had breast cancer surgery and chemotherapy.

She said: "The idea to raise funds for Kettering General Hospital came about when I lost my hair due to chemotherapy and I did not like wearing the wig given to me.

“It was also cold so I chose to wear different hats. Whilst trying a lot on in Debenhams my friend and I got the giggles and I thought, 'If I've got to wear a hat - the children at school could too'.

“I knew they would love some kind of mufti day - paying 50p or so to raise funds for the hospital. This would teach them about being a good citizen, enable them to have fun and, on a selfish note, give me a project to stay in touch with them as being stuck at home was so frustrating and I was bored.

“Word soon got round and over a few weeks over 85 schools, many local companies and the hospital all pledged their support. Design and technology was my subject so the hats had to be designed and made by the children / adults - and be 'CRAZY'!!

Glennis said: “What had we started? Everything just snowballed from there! The money was banked with KGH, to be used to help fund the new breast unit that was due to open in 2004.

“This, and the Treatment Centre itself, actually opened in 2007 and our pledge of £20,000 was increased to £100,000. Crazy Hats has funded many projects since then and we are incredibly proud to say that in the past twenty years our donations to KGH have been £1.4 million.”

Glennis’s first ever donation came from an elderly lady she met whilst on Ashton Ward at Kettering General Hospital.

She said: “I call her 'Margaret '86' and will always admire her determination and spirit as she went through her treatment.

”Talking about my crazy idea she produced a £5 from her purse and said: "You are going to make a difference." I hope we have. From £5 to £3.5 million! Wow! We have met and befriended so many of the breast care staff and consultants.

“We were thrilled in the early day when Consultant Oncologist, Dr Roy Matthew, agreed to be the Charity's President. He has been a great ambassador of all that we did and joined in with our fun events - even jumping out of a plane - twice!!

What a difference the new waiting area will make for patients

The Crazy Hats Appeal came up with the idea of a new waiting area in the Treatment Centre as an appropriate donation after listening to the experience of patients.

Glennis said: “Over the past few years many have felt that the Treatment Area, especially the waiting area, was looking 'tired' and needed 'sprucing up'.

“We asked some former breast cancer patients asked about the idea and they have been very supportive.”

What patients said about the planned new waiting area

Brenda said:  "I see it as being a much more relaxing area to sit and wait - and with room for relatives to sit down too, creating a friendlier, warmer atmosphere. For many patients it will be a first time visit so it will help to relieve anxiety."

Alison said: "I think the bigger area planned will be much more relaxing when sitting and waiting. As it is, the small waiting area is very busy and if clinics are running late you often have to stand for a long time. The garden has never been opened up so in warmer weather so it will be wonderful to sit in the fresh air."

Angela said: "It will be lovely to see the run-down garden used as it should - everywhere will be so much brighter and airy."

Carol said:  "It's great that the money is being used to enhance the waiting area and it will certainly make a difference for the people who come along for appointments and for treatment; people who are very apprehensive and worried. It will help them to walk into a calm area and calm atmosphere. Please keep the cafe open! Patients, carers and visitors need a cup of tea! Well done to Crazy Hats for donating the money for this much-needed change."

Glennis said: “It has taken longer than expected due to the pandemic but we are really excited and look forward to cutting the ribbon of an enhanced bright and cheery area, with a garden, that will not only be more welcoming, private and comfortable for patients, but for staff too.

“A great deal of thought and planning has gone in to ensuring it meets the needs of everyone.

“To this end, even though Crazy Hats may be no longer, I will still be part of the design and planning team to see the project through to the end.

“Our loyal and dedicated team at Crazy Hats worked tirelessly to raise this huge amount of money, with wonderful support from local companies and, of course, the general public.

“We owe it to them to leave this lasting legacy. It is very sad that we are having to close the charity but I know the time is right - none of us are getting any younger!

“We truly thank everyone associated with Kettering General Hospital - far too many to mention - and we wish them every success in the pursuit of the need to create a bigger and better hospital for the north of Northamptonshire."